Simonov on resignation: I do what my conscience dictates to me, not put it under pressure – Bulgaria 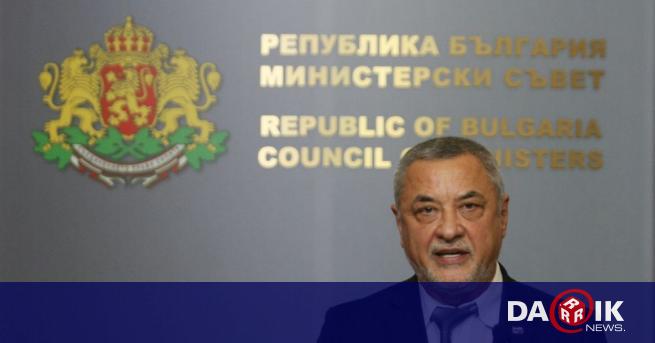 
Valery Simanov took the decision to withdraw from the post of deputy prime minister in the government on Friday afternoon after consulting with his party NSSB and its coalition partners, especially with Krasimir Karakachanov. He told the media, and claimed his resignation. Prime Minister Boyko Borisov accepted Simonov's resignation.

"I can not afford to consider this government as a millstone, creating preconditions for public moods, protests and attacks not only from the opposition, but also from parliamentary parties outside the entire groups of society," Simeonov said, is "childhood dream to become deputy prime minister "He said.

He stressed that his decision was personal and right, which dictated his conscience. "Let me see now Deputy Prime Minister Valery Simeonov resigns, if he will continue these protests and what he claims," ​​he added.

"The reasons for this are the ongoing media campaign of the last two days, in which the campaign is a continuation of my campaign against my protest statement to the Council of Ministers, but the continuation of this campaign no longer focuses on my personality as deputy prime minister and members of the NSSB parliament," Simeonov says.

"I am aware that this is a media campaign that benefits some political forces, and I am aware that this media campaign undermines the authority of the government and becomes an obstacle to the proper functioning of the current government. Bulgaria – a government that I define not only myself but also my partners as a very successful one of the most successful and I can not afford to consider this management as a millstone, creating preconditions for public moods, protests and attacks not only from the opposition but also From parliamentary parties outside whole groups of society, and therefore I am sending a resignation because As I said, it is not a childish dream to be deputy prime minister and I have taken this position only because I urged my partners to be a guarantor of this government by participating in ensuring the support of the party that I lead, "Valerie said, adding that he never let conditions be such. "I repeat – I'm not an end in itself, I did not imagine from this position that you can enter the manager to get some benefits," he explained.

"At the moment, I believe that the most correct and moral action is not to create problems for the OP and GERB governments." Of course, my act was designed to negate the protest on their behalf at least in part, and now it seems that Deputy Prime Minister Valery Simanov is resigning, whether he continues these protests and what he claims. I'm not good that I got accepted in the media because I'm not a standard politician. I think we have to tell the truth that we have to be honest, consistent, stubborn, active and efficient in whatever he intervenes. I do not put it under pressure and the question of whether Borisov told me, I tell you from now on that there is no such thing, I took the decision today after consultation with my fellow parliamentarians respectively, especially with Krassimir Karakachanov and now I Accepts my decision, "Simonov told the media.

Valery Simanov also reported what he had done as deputy prime minister for a year and a half. "These are the things I have achieved with my personal efforts and the efforts of the cabinet and my friends to push: the defense facility along the border with Turkey, and declared it an object of national importance, which was very important to ensure its maintenance; For the economy, UNESCO decision Bahrain has completely changed the initial decision of UNESCO to ban the construction of this lift, we are waiting for the SAC decision on this issue, God grants to be positive; The establishment of a working group for Vitesse was also my initiative with the participation of the Sofia municipality and a number of offices; In resolving ethnic conflicts in Asenovgrad and Shakar Mahalla, where I personally participated and proved that these problems can be solved; Providing seasonal work by changing the immigration law for work and mobility, changing and simplifying the terms of the blue card; The initial amendment of the Law on Bulgarian Citizenship and Aliens Act, which is expected to be completed; Providing a weekly connection between Sofia and Odessa; Securing the necessary funds for the renovation and completion of the Bulgarian Cultural House in Budapest; Stop the provision of 700 hectares to Buzludja of the BSP, which was prepared as a decision of the Council of Ministers suspended. I will not mention your known actions to ensure normal tourist conditions related to the implementation of the current law on noise – creating a new legal basis; Water supply to the Clotina checkpoint, "said Valery Simonov, adding legal initiatives:" That's my account for a year and a half. Give God to everyone, as they say. "

"The struggle continues, the reason for the joy of my opponents is premature," concluded Valery Simonov.