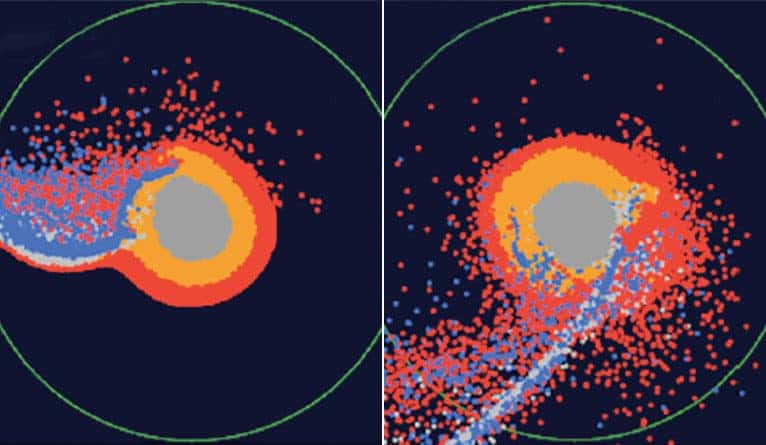 Image from the recent moon formation model. Red dots indicate matter from the ocean of the trend while the blue dots represent material from the effector. Credit: Hosono, Karato, Makino, and Saitoh.

For decades, physicists have been trying to solve the mystery of moon formation. Although some reasonable models have been proposed, none of them have been particularly notable – until now. In a new study, researchers claim that the only natural satellite of our planet was created following the impact with a Mars planet that emitted a fluid trend from the surface of the early Earth into space. This trend was formed, along with a small part of the substance of the nuisance, to create the Moon as we know it today.

A trend may be the key to moon formation

Most modern models of moon formation can at least agree on one thing – that the Earth was formed around 4.5 billion years ago with the moon joining the system shortly after two protoplasts collided violently. "The Big Impact Hypothesis" explains many of the features we see today in Earth and Moon, such as their relative size and rotation rates. But it has a big drawback that defects the entire model – chemical composition of the moon.

Now we know that most bodies in the solar system have unique chemical compositions, and so should the moon. However, lunar rocks brought home during Apollo missions show that their isotopic fingerprint is almost identical to that of minerals from Earth.

To explain the main inconsistency, researchers have developed all kinds of alternative models. One of the most prominent models proposed by physicists at the University of California, Davis and Harvard, argues that the ancestral collision made the planet early for a giant planet-sized sufgania made from the Martian rock called synestia (from syn- "Goddess of Greece and architecture). According to this theory, melted rock fragments that were emitted into the orbit following the influence formed the seed for the moon. Synesthesia probably does not last long – no more than a few hundred years – because they can not sustain their heat, shrinking rapidly and finally collapsing to a molten star. And while Earth's synastation shrank gradually, the Martian silicate rock descended to the Proto Moon, which explains how the Moon inherited its composition from Earth. Another model suggests that the planet that collided with Earth would spin quickly. Both models are reasonable but not reasonable. They are simply involved too much "if".

In comparison, the new model proposed by Japan scientists in the Marine Science and Earth Science and Technology University of Yokohama and Yale University sounds closer to reality.

The researchers argue that shortly after the Earth was formed, it was covered by a sea of ​​warm magma, while the impact object was made of solid material. The team carried out a computerized simulation showing that the effect was heated to the trend much more than the solids from the impact object. According to this simulation, the trend expands in volume and shoots orbit to create the moon, explaining why Earth has much more substance than moon makeup. Even a glittering blow from the nuisance would have sufficed to knock more than 70 percent of the debris from the ocean.

This new model confirms earlier theories about how the Moon was created, without the need to offer non-conventional collision conditions – but it is not the final word. The Japanese researchers found that the amount of waste from the effect was similar to the current mass of the moon. Previous work, however, suggests that waste should be worth about three to four times the mass of the moon. In the future, researchers will tweak other variables such as the mass of the effector and its rotation to see if the amount of debris generated is better fit.

The findings appeared in the journal Nature Geology.