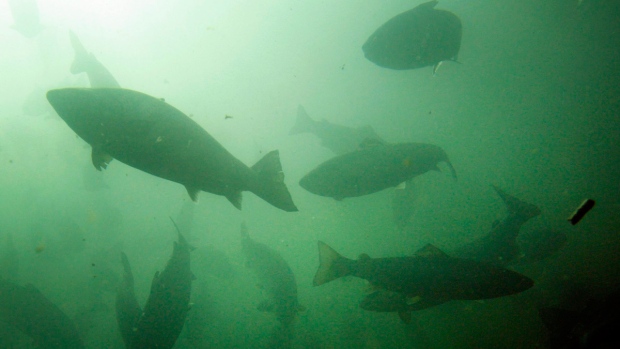 Iconic species famous for painting anglers to the area, but researchers wanted to know more about their youth survival rates.

The findings, by the Atlantic Association in conjunction with the Fisheries and Ocean Canada and the Ocean Tracking Network, are published in an article Thursday in the ICES Journal of Marine Science.

"The study only started because of an interest and a misunderstanding about how these fish behave and their survival while they migrate downstream," said Jason Daniels, research scientist with the Federation and a co-author of the report.

"Acoustic telemetry has allowed us to have a little window into what's going on."

The complex technical research followed more than 2,800 young wild Atlantic salmon, known as smolt, from populations in four rivers that emptied into St. Lawrence Bay. They include the Southwest Miramichi, northwest Miramichi, and the Restigouche rivers in New Brunswick and the Cascapedia River in Quebec.

Smolts collected every spring as they made their way down the river and were labeled with small acoustic transmitters that tracked the speed of migration and survival rates.

"Over the course of the 14 years of the study, various survival estimates have not been trending for the population of the Gulf of Lour, but they have declined to populations moving through the Bay of Miramici," the report said.

Data collected indicate that fish survival depends on factors such as size of application, distance to open water, conditions encountered, and presence of predators.

"There is a positive probability of survival by fresh water and effluents." The chances of survival of 16 cm in cm were 1.5 to 1.7 times higher for the 13.5 cm smol tagging length.

Survival rates for smolt tagged at Restigouche and Cascapedia through their common estuary in Challur Bay fluctuated from year to year, but remained relatively high – 67 to 95 percent over a period of 14 years.

These tariffs were initially similar for smolt leaving the west and east Miramichi rivers into Miramichi Bay, but this changed in 2010 when the "downward trend" began with varying survival rates between 28 and 82 percent.

"The spawning period coincides with the timing with the downstream passage," the report states. "Atlantic salmon plates were identified in the stomach of the striped bass sampled from Miramichi."

Other factors that affect survival and survival can include water chemistry in the watershed of West Miramichi and modification of experimental conditions.

According to Daniels, the higher mortality rates for Northwest Miramichi are cause for concern because the average rate of return of blows to the river is between 2 and 3 percent.

"When you see 80 to 90 percent of these smolts disappear just at the mouth before they even reach the sea, you really scratch your head wondering how you're going to see three or four percent of smolts make it back as adults," he said.

The study confirmed that most deaths occur in the first days or weeks after smolt leave fresh water. However, the researchers said that the survival of the fish improves when the vigor passes from the shore.

"The estuary is where most of the mortality seems to take place," Daniels said. "These fish lived their entire lives in a freshwater environment and they undergo a lot of different physiological changes, so they are already in a state where they are stressed."

Besides adapting to the environment of salt water, he said they should also deal with another group of predators, so the results are really not surprising.

"The ability to study several rivers at once over a number of years allows you to see these trends and compare them to rivers that do not have the same kinds of pressures," Daniels said. "You can see the relative effect of how these pressures may be on certain populations of salmon."

By Keith Dunst in Halifax