It was the last day Fran García-Huidobro in Chileviión: "I did not know they loved me so" | TV Show 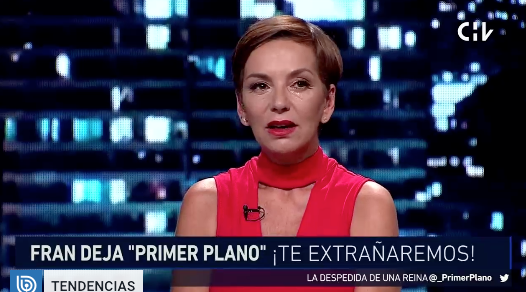 After 15 years in the Tribune, on Friday Francisca Garcia-Huidobro He broke up with the channel on his last performance Close-up.

The chapter began to announce the departure of García-Huidobro, along with an overview of the changes that other television faces experienced last month.

Then, the signal announced the new role that his television partner Julio César Rodriguez will be on the channel, make the new animation of "La Mañana".

However, emotion came to the last block of the plan when Communicator Julian Alfenbein went to the study Close-up, To express his feelings and to present a farewell film prepared by the channel.

In the drawing, some faces, some of the production excompañeros devoted a few words to him, among them, The runner Pamela Jiles coined it as a "big woman of the TV" And he expressed his affection.

When the program returned to the studio, the panel was shaken. "If you knew what I wanted, how important it was to me"He said it was a "very difficult month".

"Not every face has the honor of being fired like that, I think I've won it, I only have words of gratitude," said the entertainer who came as an actress in the Tribune.

"I knew they loved me, but I did not know how much"He said with tears after telling how some of the staff from the war room came to say goodbye to the channel.

Afterward, his classmates gave him a few words of farewell and recognition of his work. Actress Leonor Varela also sent a message of affection, in a video, like her family.

As approved by Channel 13, the panel and actress will join their initial signal to animate the spaces associated with the Vienna Festival of Low Mr 2019.

It should be remembered that, within the extensive career of Francisca García-Huidobro in Chilevisión, she encouraged such programs Introduction, Vineyard fever, I want change, damn fashion And he was a jury member Chilean talent, dance fever, skip if you can And the Vienna Del Mar Festival in 2012.