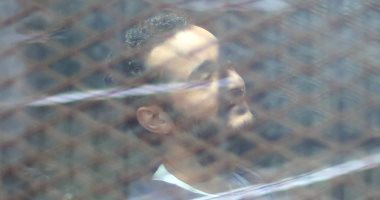 The trial of Ahmed Duma, in the case of the "Cabinet events," which was discussed by the Terrorism Department 11 to the Criminal Court in southern Cairo, headed by Attorney General Muhammad Shirin Fahmi, came to an end after setting the hearing on January 9.

At the first stop .. similar falls

After the investigation was completed, the State Attorney's Office transferred the case to the Cairo Court of Appeals in order to set a hearing for the defendants. The appeal was set for July 28, 2012 to consider the defendants' first trial before the Cairo Criminal Court, headed by Attorney General Assem Abd al-Hamid.

The third leg .. Down in a circle

More than a year after the case before the Cairo Criminal Court, headed by Attorney Osem Abdel Mage, the court decided on November 19, 1013 to resign from the case because of his embarrassment.

The Court of Appeals ruled the Court of 5 Giza crimes headed by Naga Consultant Shaha to consider the case after the first circle went down.

The fifth stop is insulting the court

On December 9, the court, headed by Judge Nagy Shahata, sentenced Ahmed Duma to three years in prison and fined him 10,000 pounds for insulting the president of the court.

The sixth leg .. The verdict in the first sentence

On February 4, 2015, in the first trial, the Giza crimes, headed by the attorney general Muhammad Naghi Shahata, were sentenced to life imprisonment for Duma and 229 others in the lawsuit, forcing them to pay £ 17 million for the damage caused and punished Events for 10 years in prison.

On October 12, 2017, the Court of Appeals accepted Duma's appeal against his sentence to life imprisonment and decided to try to return to another room.

On December 28, 2017, the Court of Appeals, headed by Counselor Adel Babash, set up the meeting on January 3, 2018, to try again political activist Ahmad Duaa in the case before room 11 of the Cairo Criminal Court, headed by the adviser Muhammad Shirin Fahmi.

Station 9. Recitation of the order of reference

In the first hearing on the trial on January 3, 2018, the Bar considered 11 acts of terrorism headed by Attorney General Muhammad Shirin Fahmi, the first of the trial trials. Doda's defense demanded that his lawyer release a previous decision by the judge to release the defendants and the trial Accused of pre-trial.

The court offered more than six meetings in which they participated: the meetings included meetings of Duma during a conversation with Wahal al-Ibrahimi and the recognition of the Molotov cocktail at the People's Assembly, and on February 18, 2018, the Science Park displayed videos featuring the moment of fire. Al-Qasr Al-Eini, and videos showing the moment of destruction of parts of the Shura Council and the People's Assembly.

In more than 10 meetings, the court heard witnesses in the case, and al-Shazli confirmed at a meeting on May 22 that three demonstrators, including Duma, had asked him to prepare the cocktails, and he confirmed that he refused to give them fuel. On Doma during his appearance in one of the programs.

The 12th station .. is similar to an authentic actor

At the end of the hearing held on July 25, 2018, the court ordered the defendant to amend the legal position of the defendant on the third item in the referral order, in order to turn him into an original player and to change the indictment.

The 13th Station … the prosecution

In a meeting held on August 13, the court listened to the prosecutor's claims and said, "What are you saying, Mr. President, the people of Egypt, those who went through it and learned from its mercy?" Mr. President, they are activists of the moment, otherwise gathering and colliding with the people of power to create chaos as if they were living alone On the land of Egypt .. Their arrogance described them as above the law Imagine being unaccountable for their actions .. The defendant and his friends Kasr Street eye for building is vital and ignite and burned more than 200 thousand scientific compound book and stole what is left of the Reiki remnants .. The President does not stop the flame At the People's Assembly not extended to the Council of Ministers .. This building was the main target for the masses to overthrow the transitional government … The prosecution demands The maximum penalty against the defendant.

In three sessions, the court listened to the defense of Taher Abu al-Nasser, who filed the patent application for his client, and made many protections, primarily the defendant's lack of connection to the events, and paid blank documents attesting to the validity of the accusation "Duma" Original player in the fire of the People's Council.

In a hearing held on 15 November 2018, the court decided to hold the case on January 9 to express the sentence while the defendant was still in prison.

The events of the incident date back to December 2011, when clashes broke out between demonstrators in the area of ​​the Council of Ministers, the People's Assembly and the Shura Council, and were put on trial and other defendants for charges of collecting, holding white and Molotov weapons, attacking members of the armed forces and police, burning the scientific compound, The ministers, the people and the Shura Council, and begin to storm the headquarters of the Interior Ministry in preparation for its burning.