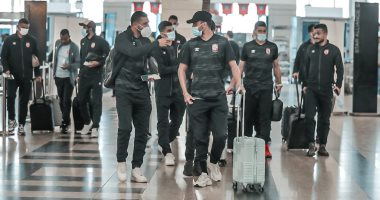 Al-Ahly wears the alternative uniform consisting of a gray shirt, black shorts and a black sock, at the al-Marrich match in Sudan scheduled for 15:00 tomorrow, Saturday, provided the Sudanese champion wears a full red team, as agreed at the game’s technical meeting, held this morning Today, Friday, at the headquarters of the Football Association of Sudan.

During the meeting it was agreed on the organizational matters related to the game, in terms of the date of arrival at the stadium, the start of the warm-up process and the colors of the shirts each team agreed upon.

Al-Ahly will wear the alternative uniform consisting of a gray shirt, black shorts and a black sock, and the goalkeeper will wear an all-yellow kit, and the Elmarik team will wear a completely red color.

The technical meeting was attended by Sayed ‘Abd al-Hafiz, the football manager, Samir Adli, the general manager, Maher Abdulziz, and Omar Mohabas, the team managers. Al-Ahly is preparing for an important game against Elmarik Sudan tomorrow, Saturday, in the fifth round of the Champions League.

He wants to win, raise his balance to 10 points and qualify for the next round. Al-Ahly managed to get a big win away from home, over the Congolese Vita Kolb 3-0, in the fourth round of the team stage of the tournament, to take second place in Group A, after playing 4 games, and winning two games, including against Almeric from Sudan in Cairo and the Vita Club in the Congo ., And a tie with Vita in Cairo, and suffered a lone loss from Simba in Tanzania.