Fifty Autolib "at an auction near Blois 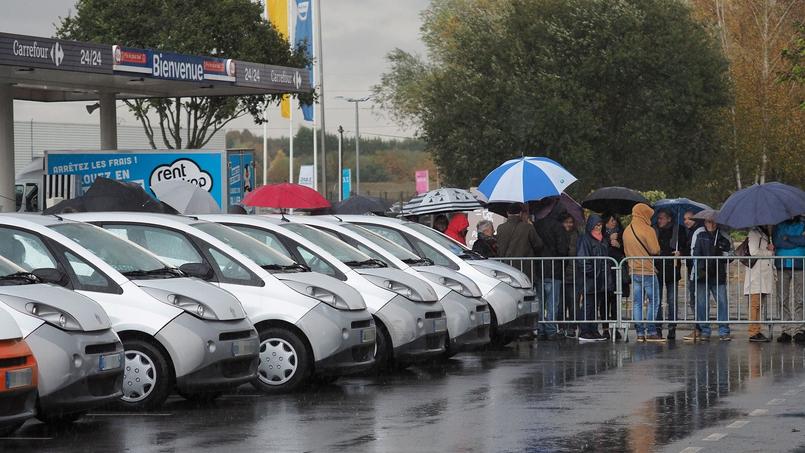 In the late morning, 50 electric vehicles sold for 3,700 euros each. About 3,500 cars are now stored in a former target plant in Loir-et-Cher, out of 4,000 that were counted in Autolib. They have not been used since the end of July.

Deterrent Since the end of July, 50 electric vehicles are in the dawn of a second life. The first sale to individuals of electric car sharing cars Autolib Paris takes place on this Saturday in Romorantin (Loire et-Cher) by Cavarec Garage. The sale began around 10 am with 200 people waiting. In the late morning, 50 cars were sold for 3700 euros. Organizers distributed 50 others but did not present them to buyers who would pay the advertised price without seeing them.

The Cavarec garage on the reputation of the service and the starting price is measured to attract buyers. This does not mean if other sales will be held nor the terms of this sale. Since the summer, 3500 Bluecar, out of the 4,000 counted in Autolib, were stored at the former Matra Romorantin factory. In 2011, 150 thousand subscribers were invested. But these small cars, designed by Italian designer Pininfarina, had to deal with a change of ways to move, with electric bikes, VTC and private car rental.

Above all, the cost of the service drove the mixed union, consisting of 103 municipalities in the Paris region, to denounce the contract binding them to the operator, the Bolloré group. It was discontinued in June before the termination of service a month later. Since then, the Bolloré group claims compensation of 235 million euros, challenged by the union. Car sharing services were relocated in Paris and Paris, established by car manufacturers or rental companies.