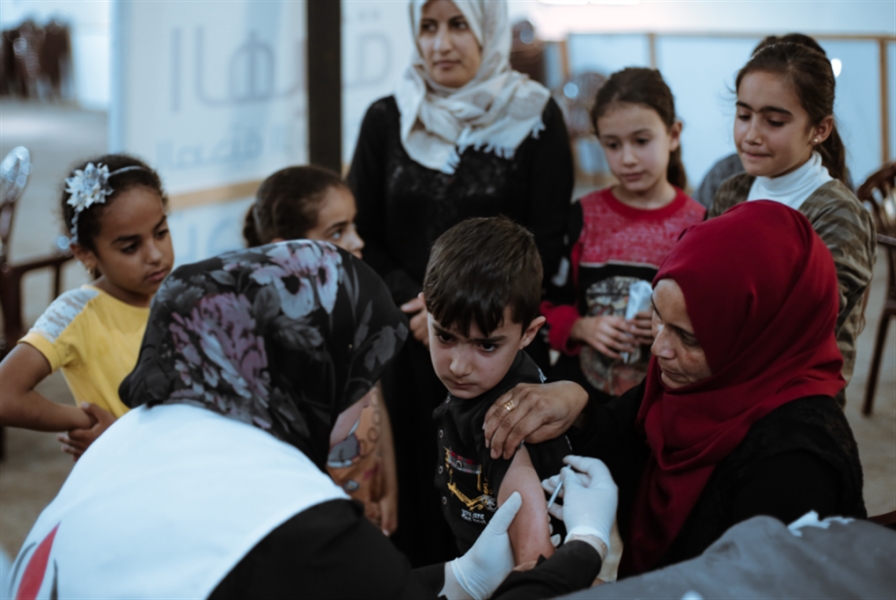 76% of the children in the southern suburbs of Beirut, Baka and the south are "dropouts" of mandatory vaccinations, according to a field survey conducted by the Islamic Health Authority in 119 localities and included a large sample of 82,463 children under the age of 18.

The results showed that most parents stop the mandatory immunizations for their children after the age of five. More than 70% of dropouts are children who drop out over five years. The benefits for ages 10, 14 and 18 years are more important than basic doses. The vaccine for tetanus diphtheria (tetanus and pertussis) was one of the most prominent vaccines that did not receive most of the dropout.
According to the head of the guidance and coordination department of the company, Lama Hawi, the concept of the vaccine leak includes three types of dropout: the total demonus, a child who has not taken any vaccinations since birth, the partial impudent who has participated in mandatory vaccinations, all or some of his vaccinations, Documenting it.
The figures are consistent with those of the United Nations Children's Fund (UNICEF) on leaks of mandatory vaccinations in various parts of Lebanon, including those that did not reach the "body." "The dropout rate in Lebanon is about 66%," Dr. Rohame said. Yemot, head of UNICEF's immunization program.

70% of the "vaccine fatalities" are over the age of five

These data are shocking, "can not be considered national scientific figures can be distributed," according to the head of the Ministry of Health's main health department, Dr. Randa Hamada, although based on accurate field survey.As the ministry data show that the national level leak rate is only 8% She explained that there are 219 meetings in Lebanon, which suffer from poor health coverage, so the data issued by the Committee and UNICEF are "likely and reasonable because they included areas with poor, poor and remote coverage."
However, the Ministry of Health figures, in turn, are subject to many doubts, especially since they do not have a precise field survey on dropout rates. According to informed sources, the ministry relies on data received from health centers run by civil associations, "and often manipulates those involved in these organizations in the number of registrants to ensure that they receive free vaccines from the office for commercial purposes." Khawi said that Hamadeh's remarks "do not contradict The results of the study, covering poor and remote areas. "
The "Health Authority" study has entered the "comprehensive vaccination" project, which began in 2011 to reduce the leaks of mandatory vaccines. The first phase of the project was carried out on a number of children in 119 communities in the south, Baka and the southern suburbs, and the second stage was completed with the goal of turning those who drop from vaccines to health centers. The project ends today with dialogue tables at the Pearl Hotel in the southern suburb, which will be brought to the recommendations that can be adopted as part of the leak policy.

Key Leakage Factors
And the factor of parents' culture playing an important role in the leak, the results of the study showed that two factors contribute to the high dropout rate of the state vaccines: after the medical centers for hosting, and the weak culture of the vaccine in parents. "The foreign worker reinforces the issue of the leak, mixing the refugees (who were their citizens) and foreign workers, who often neglect the vaccine, helps raise the total dropout rate by combining fortified environments with those not fortified," Hamawi said. Other factors are the chaos in the vaccine market, and sometimes a deliberate increase in parents' fears of vaccines (such as child fever, vaccination, etc.) to market certain types of drugs targeted to vaccine-battered diseases. Will move from communities with protection needs to communities with epidemiological problems. "

Where are the "mandatory" vaccinations?
The Ministry of Health provides free vaccinations for a number of diseases that may be fatal or cause permanent disease (polyiomyitis, meningitis etc.) distributed to medical centers, most of which (67%) are managed by the community. Although vaccinations are free, UNODC vaccine officer Dr. Roham Dieut notes that the vaccine is not, and is often "a small amount of money." Some centers, in order to "disperse" the doctors who carry out the vaccine, require parents to examine the child, what Which increases the cost to poor and poor groups and contributes to the parents' "disgust".
"In some European countries, for example, the health record of a child's vaccination is accompanied by identity, and it is required when the transactions are carried out," said Lamia Al-Hamawi, head of the Health Guidance and Coordination Department of the Islamic Health Authority. Official and others. She notes that schools in Lebanon ask about the child's health record, "but most doctors are sometimes performed by doctors!" Therefore, according to Al Hamwi, strict measures are required to effectively control the immunization process and apply the mandatory health record as a mandatory document to a person.

The students' children are also being dropped
Although the level of education of low-income people contributes to the advancement of dropouts, field surveys have shown that many people classified as educated do not mention their children for various reasons, including their frequent work, or fear of the consequences of vaccinations on their children or Just negligence!