"Yellow vests": Philip intends to hold his "hat" despite the continuing recruitment 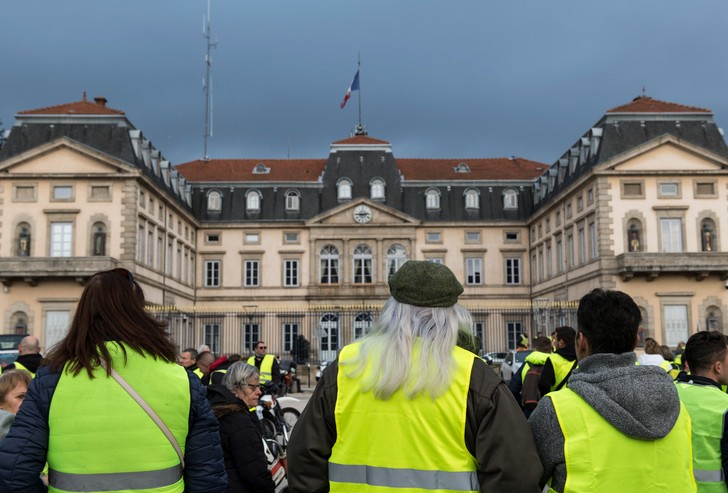 Following the recruitment of "yellow vests," Edward Phillip said Sunday he had heard "anger" and "suffering" but wanted to keep a "hat" while blocks and dams continued in some areas and may persist Monday.

"A government that will change permanently on foot, zigzagging according to the difficulties, will not lead France where it should be," said the Prime Minister, inviting the 20H newspaper to France.

"The course we set up is good and we'll keep it," he said, promising to hear the "anger," "suffering," "lack of prospects," "the feeling of lowering the rating and perhaps even abandonment" of some 290,000 people who demonstrated Saturday against the fuel tax Costs.

Sunday, recruitment was lower, but many dams or roadblocks were reported on squares or on roads, such as Montelimar, Chalon-sur-Saône, Cannes, Le Mans and other places in the west, in the new acetana or in the Vaucluse or Bauer.

In the evening, a hundred "yellow vests" blocked access to the oil tank of Verne-sur-Seix, near Rennes, west of France, preventing the passage of trucks.

Across France, the protesters were about 46,000 Sunday, according to a police source, from 290,000 with a yellow vest on the back the day before.

The Interior Ministry did not publish the number of demonstrators on Wednesday. About 150 sites, protesters called for a resumption of movement, according to the ministry.

In Cannes they intervened in the afternoons to disperse a thousand "yellow vests" on an interchange south of the city.

In some places, "yellow vests" indicated that they would continue the movement Monday, such as in the High (Lower) or Morbihan. In Le Mans, a union with truck drivers and farmers to deny access to A28 is announced.

The human price is heavier than the dead, a 63-year-old demonstrator injured by a frightened driver, and more than 400 wounded – including 14 seriously, including the police – and the damage was great. 282 people were arrested.

"Freedom of demonstration is not anarchy," Philippe Philippe says.

On Sunday, demonstrators were seriously injured near San Quentin (Iesana), when one driver forced a checkpoint.

If the "yellow vests" did not paralyze France, the entire area was damaged during the weekend by their actions, organized outside the unions.

On Saturday, Emmanuel Makron and Edouard Philippe left Christoph Kastner in front. The head of state, who visited Germany on Sunday, November 18, is a day of remembrance for the victims of war, did not speak because of the "duty of decency," according to the Elysee. 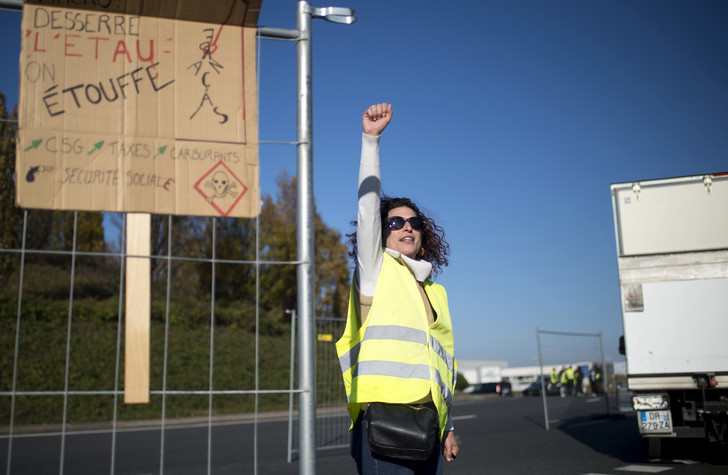 Demonstrators in Saint-Herblain near Nantes on 18 November 2018 / AFP

The head of state "has already spoken and spoke again," "He knows when there is urgency and he will do it," said Minister of Missions Colin Gourault.

Francois de Rugi or Gerald Dermanin were sent to the media to protect the need to lead the ecological transition despite the "budget cuts" recognized by the budget minister.

According to a poll published in the Journal du Dimanche, 62% of the French believe that "preference should be given to purchasing power even if it moves less quickly in the energy transition" in the coming years.

The president of the National Federation (RN), Marin Le Pen, who did not demonstrate on Saturday, called the "great success" of the mobilization and called on the government to "make quick decisions" to "restore peace."

"What matters now is what the President of the Republic will hear and understand, and the feeling I have is that they do not understand," said Republican boss Laurent Wauquiez. Sunday afternoon. "We need an initiative on taxation," according to Francois Baroin, president (LR) of the Association of Mayors of France.

From the far right to the far left, several elected representatives dressed in yellow vests sat on Saturday with demonstrators, including Mr. Woches Poi-en-Velaye and French leader Inseinise Lok-Lennach of Concord.

On the side of the union, CFDT boss Lauren Berger called Emmanuel Macaron "very soon to unite" unions, employers and non-profit organizations "to build a social alliance of ecological conversion."

An idea that was politely rejected yesterday by Edward Phillip: "I do not believe that what + yellow vests + is a big conference with politicians and union officials.