Kwaśniewski in "facts after facts" on the return of Tusk: he made a decision 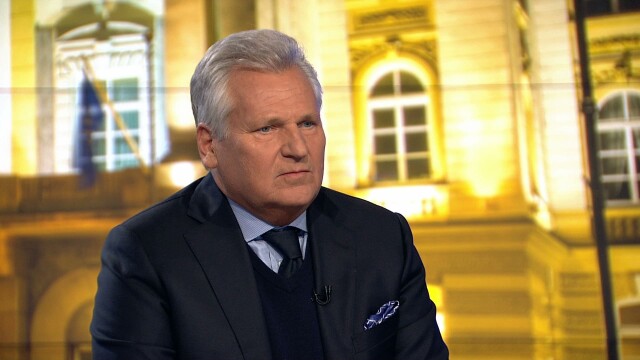 Alexander Kwaśniewski estimated in "Facts After the Facts" that Donald Tusk "behaved properly", coming to Poland for celebrations on the occasion of the 11th anniversary of independence and re-establishment.

Donald Tusk participated in a ceremony in Warsaw on Pilsudski Square on the occasion of Independence Day. A festive briefing was held in front of the Tomb of the Unknown Soldier.

During the ceremony, President Andez thanked Duda for coming to the guests invited to the ceremony. Among them, he did not mention the President of the European Council. Donald Tusk was in the field for the authorities, but he was in one of the following lines.

– He is a Pole, the former prime minister of Poland and now the chairman of the European Council, and this position was undoubtedly his place in Warsaw, and I am sorry that it was not appreciated, he was not accepted, he was placed in another row and he is still a high representative of Europe, Said Kwaśniewski.

– If only [szef Komisji Europejskiej Jean-Claude – red.] Junker comes here, I do not think he is directed to the fifth row. Just as I do not think Juncker had a problem finding his language, which he has to submit – said the former president.

In his opinion, the representative representing the European Union should take the place of the President, the Sejm and the Senate. – The fifth language should be from the EU – Kwasniewski assessed. – In my opinion these are political errors resulting from pathological aversion of people that can not be justified – said the former president.

"Tusk made the decision"

– Tusk did not investigate, Tusk made the decision. Tusk returns to Polish politics simply. I do not think it leaves any illusions. Of course, he does not have to decide today. There will be time to make decisions. Much will depend on the results of the parliamentary elections – he estimated the guest of "facts after facts."

– Tusk in a sense, is building a trap in this sense, because it raises great social expectations and how these expectations will really be very high, it will be difficult to say "No, I changed my mind, I do not want, I withdrew" – said the President.

According to Kwasniewski, Polish public life will not be lost if Donald Tusk with his international experience returns to Poland. – Will voters trust him enough to entrust him with the most important role in the country? It's open already-he said.

However, as he added, Tusk's return to Polish politics was "logical" and "valuable." "I have no doubts," concluded the former president.

Recent visits of Tusk in Poland

Tusk, among others, participated in the Freedom Games in Lodz where a lecture was held on November 11, 2018. Poland and Europe, two days, two lessons.

– If Josef Pilsudski and Lech Walesa could defeat the Bolsheviks, and both were in a much more difficult situation than they are today, why can not they overcome the modern Bolsheviks? – he asked, and then turned to the participants.

In his lecture, he sought to protect the rights of the Poles and to protect freedom and Polish independence.

On Sunday, November 11, he was the former prime minister of Warsaw, where he participated in Pilsudski Square at a festive briefing marking Independence Day and laying a wreath on the grave of the unknown soldier. Tusk together with Poe leader Gzegorz Schetyna, former Prime Minister Ewa Kopacz, Deputy Speaker Bogdan Borusewicz and future president of Warsaw Rafał Trzaskowski also laid a wreath in front of the monument of Marshal Piłsudski in Belvedere.

A group of people with white and red flags and the flags of the European Union were also gathered in front of the monument. They read, among others, the name Tusk.

Last week, Donald Tusk was interrogated by the Gold Gold Commission. In early October, the former prime minister visited Krakow, where he appeared at the conference "The role of the Catholic Church in the process of European integration."