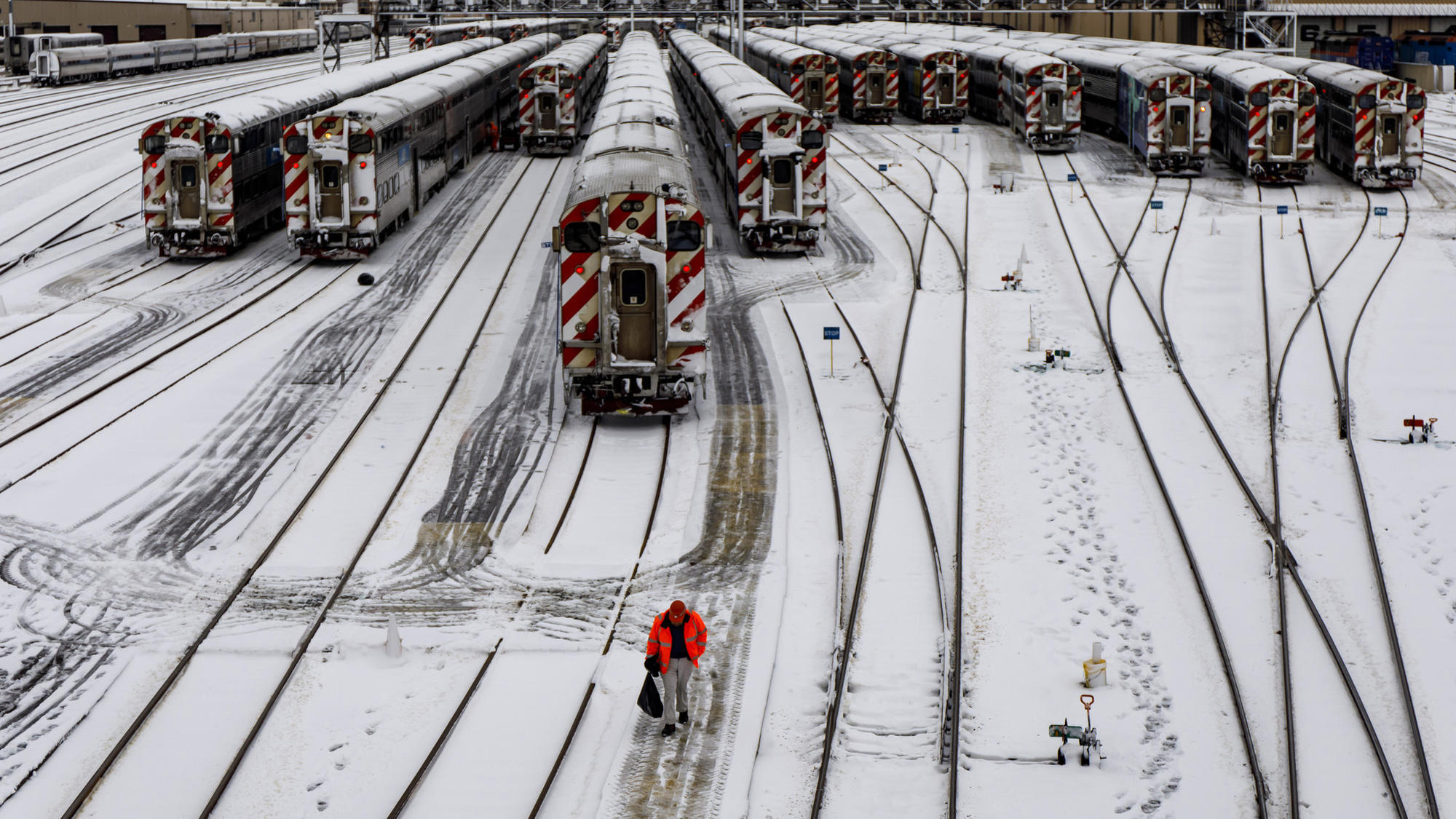 Travelers at O'Hare International Airport were still experiencing long delays on Monday afternoon, hours after one of the largest November snowstorms on record hit the Chicago area.

The storm dumped as much as 13 inches of snow and contributed to more than 1,200 cancellations at Chicago's airports on Sunday and Monday. Delays for arrivals at O'Hare averaged 1 1/2 hours as of 3:20 p.m.

The heavy snow also caused delays for commuter railroad Metra and on roads during the morning rush hour, although conditions had improved by Monday afternoon.

The Federal Aviation Administration cited weather conditions, especially high winds, as a cause for airport delays at O'Hare and in the Northeast, including airports in Boston, New Jersey and New York.

Some inbound delays at O'Hare were more than three hours, causing growing frustration for passengers waiting to return home from the Thanksgiving holiday.

Shaena Wright, 18, waiting in line to rebook her flight with a group of college students trying to get back to Washington, D.C.

"I really need to find a flight," Wright said. "I'm hysterical at this point."

Chicago Department of Aviation spokesman Lauren Huffman said that the city was able to open its parallel runways at O'Hare on Monday afternoon.

"Hopefully, that will help," she said.

Conditions were better at Midway Airport, where delays averaged less than 15 minutes. Just 71 flights were taken at Midway, compared with 1,161 at O'Hare, according to the Aviation Department.

Boards displaying departures at O'Hare were filled with red-marked cancellations. A snack cart was wheeled up to appepe American Airlines customers waiting in a particularly long line.

Adrienne Forgette, 63, of Farmington, N.M., had come to Chicago to visit her family. Her daughter-in-law was ordained on Sunday, she said. Her flight home was delayed several times and then cancelled.

"It's a pretty routine thing," she said as she waited in line to rebook her flight.

"It snowed this much in New Mexico two weeks ago," said Forgette, showing an inch with her fingers. "And everything was taken."

Metra saw extensive delays on all its lines Monday morning due to downed trees, cars stuck on tracks and some mechanical problems. But spokesman Michael Gillis said he does not expect big problems for the afternoon rush.

Most severely impacted on Monday morning was the Union Pacific North Line from Kenosha, which saw several long delays, including one that took about 2 1/2 hours for an outbound train. Delays along the line were caused by a downed tree near Lake Forest that got caught in a power line, Gillis said.

Metra officials had to wait for Commonwealth Edison crews to clear away the mess.

Another big delay was caused by a bus crash near Metra tracks on the North Central Service in Prospect Heights.

For the afternoon, a competent of delays had been reported as of 3:30 p.m., including a 60-minute delay on an inbound Union Pacific Northwest Line train.

Vehicles on area roads moved slowly due to the snow during the morning rush hour, but travel times improved as the day progressed, Illinois Department of Transportation spokesman Guy Tridgell said.

Tridgell said expressways through the Chicago area are in "very good shape," and that crews are now focusing on ramps, shoulders and other spots that need attention.

"We have manpower and equipment out in those locations, but motorists should expect a slower afternoon and evening commute, with some slick conditions expected," he said.

He warned that IDOT will have a limited number of plows out overnight treating surfaces to address freezing and watch for drifting snow, so drivers need to be careful.

"The public needs to be aware the plowed surfaces that appear free of snow and ice can still be quite slippery," Tridgell said.

The CTA encountered no significant weather-related problems on either trains or buses, spokesman Jonathan Kaplan said.