When should you do it? 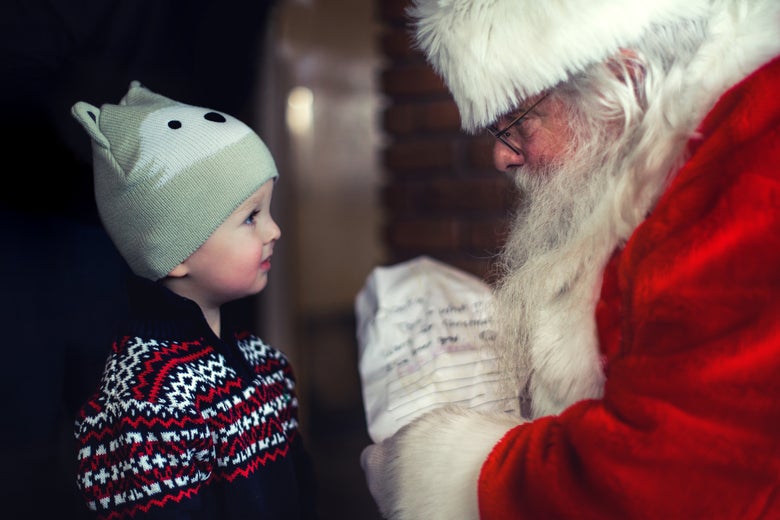 Now that Thanksgiving is behind us, we are firmly within the Yuletide season. Along with season's greetings-and the opportunity to listen to "All I Want for Christmas Is You" on repeat for a month-comes an existential crisis faced by parents everywhere, as highlighted by Popular Science: Should parents lie to kids about Santa Claus? Around 83 percent of American four-year-olds believe in Kris Kringle-black, white, or penguin-and that number has largely held constant over the years since the omnipresence of the Internet. But somewhere between 4 and adulthood, those kids are going to learn the truth. Should parents be hiding that truth from them? Or should they view this as an opportunity to deliver an early, chilly micro-dose of reality?

The experts interviewed by Popular Science are torn. Cyndy Scheibe, professor of psychology at Ithaca College, sees little harm in preventing babes in toyland to dream of flying reindeer-as long as parents are content to let go of the myth when their child begins to question the logistics of Santa's naughty list. Philosophy professor David Kyle Johnson, on the other hand, is fully convinced that indoctrinating children into the Santa story not only puts kids' burgeoning critical thinking skills at a disadvantage but opens the door for trauma. "When we say, despite the evidence, they should believe anyway, that's a very dangerous precedent to set," Johnson told Pop Sci. Children "are curious about the world, want to know about it, and trust their parents to provide them with accurate information," he wrote in his book, The Myths that Stole Christmas. "When we tell them the Santa Claus lie, we betray that trust."

Sure, but we also do that when we tell little Theodore that McDonald's ran out of chicken nuggets for the day and we'll just have to eat at home. Every time every kid will realize that McDonald's never runs out of chicken nuggets, and that a large man from the North Pole can not travel faster than the speed of light. It seems safe to say that few will experience those realizations as truly jarring or will grow up incurious naïfs. Scheibe's research shows most kids figure it out around age 9, which means I'm probably only 13 years beyond my belief in Santa, and I do not even remember this supposedly tragic event.

After all, is not parenthood itself mostly just a series of little white lies told to make the day easier? Figuring out that it's not actually illegal to drive with the interior lights on, or that Santa is fake, is more often fodder for Twitter threads than for therapy. As the season for giving rapid approaches, parents can give them a break in regards to this particular hallmark of childhood. Sure, lie to your kids about Santa. It's fun! Once they start asking increasingly skeptical questions about how exactly. Nick gets into apartment buildings without chimneys, feel free to break the news of his nonexistence with the same level of care given to telling them that the moon is not actually made out of cheese. And then you can tell them about the greatest Christmas scam of all: capitalism.