How to bank credit help in agriculture? | Finance 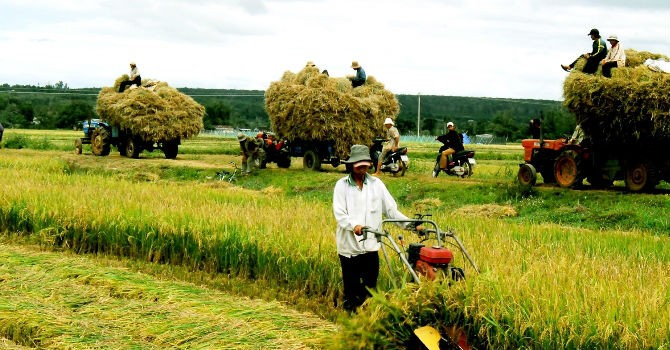 How much capital has been "pumped" for agriculture?

Loans to the agricultural sector (agriculture – farmers – rural areas) receive special attention from the government. Accordingly, the new government issued the Order No. 9 (July 9, 2015) to amend several sections of Order No. A number of policies and regulations have been adapted to the new development situation in accordance with the trend of the Fourth Industrial Revolution (CM 4.0).

Specifically, doubling the credit limit for farmers to 100 million and 200 million compared to the old limit of 50 million and 100 million; Regulations on debt restructuring, freezing of debt and appropriate grace period … in which the loans; High-tech Agricultural Loans …

With the new guidelines, expect great development in the agricultural sector when the flow of bank credit flows properly and must be effective.

So, in recent times, how much the banking sector drew capital for agriculture?

According to the Central Bank of Vietnam, agricultural and rural credit by the end of 2017 accounts for about 20% of outstanding loans to the economy and reached 1.31 trillion dong, up 25.5% over the end of 2016.

However, by the end of 2017, capital flows for agriculture, forestry and fishing alone accounted for 49.3% and reached 654.590 billion VND.

Loans in agriculture in rural areas continued to grow 4.2% (VND 55,416 billion) in the first three months of 2018 and reached VND1.66 trillion, accounting for 21% of the country's outstanding loans.

Five months later, the rate of capital injection to agriculture in rural areas rose sharply by 12% compared to the end of 2017 with 101.880 billion dong, bringing the outstanding debt in this sector to 1.46 trillion dong, accounting for the ratio 23% of total debt in the economy in August 2015.

Thus, in the first eight months of 2018, about 157,299 billion VND sucked into agriculture in rural areas.

In addition, until the end of Q1 / 2018, outstanding loans to agricultural enterprises reached 488.746 trillion dong, accounting for 35.8% of all loans found in agriculture in rural areas.

Vietnam Bank for Agriculture and Rural Development (Agribank) is a specialized bank and is almost exclusively a "monopoly" for agricultural loans, accounting for more than 50% of total lending to agriculture and rural loans in the entire banking sector. goods.

As of 31/12/2017, Agribank has provided loans in rural areas of 645.357 million VND with over 3 million customers. Some of the outstanding loans in this segment accounted for more than 70% of Agribank loans.

According to financial statements for the second quarter of 2018, as of 30/6/2018, Agribank has total loans reached 925.217 billion dollars, an increase of 5.5% compared to the end of 2017. In particular, loans for payment of loans for agriculture, forestry and fishing reached VND 272,288 billion USD, up 3.7% from the end of 2017 and accounting for 29.43%; Outstanding loans for domestic employment, household production and self-service reached $ 193.626 billion, up 11.6 percent from the end of 2017, accounting for nearly 21 percent. These two sectors constitute 50% of Agribank's loans. 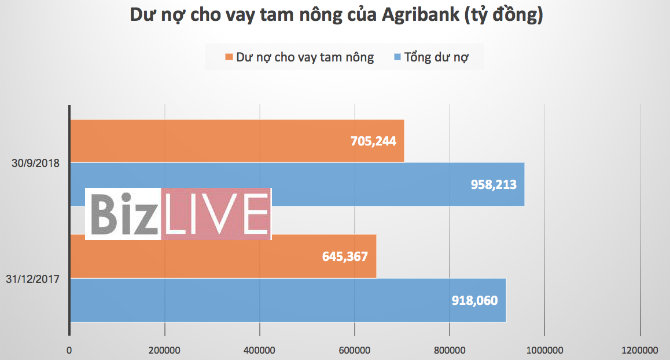 Apart from Agrivenk, many banks have opened a capital to "flow" to the agricultural sector, albeit slightly compared to the needs of this area. For example, by the second quarter of 2018, Saigon Bank (SHBank) provided loans for agriculture, forestry and fishing to VND45,326 billion, accounting for 21.75% of all loans. Asia Commercial Joint Stock Bank (ACB) provided only loans for agriculture and forestry 873 million VND, accounting for 0.4%.

According to the State Bank of Vietnam, agricultural credit has contributed to bring the value of agriculture, afforestation and fishing production in 2017 an increase of 2.9%; Q1 / 2018 grew by 4% over the same period last year.

However, there is need for added value for agricultural, forestry and fishing products, which will require a comprehensive reform in agricultural production, bank credit will have to contribute significantly to revolutionary innovation.